How NOT to save money on a bathroom 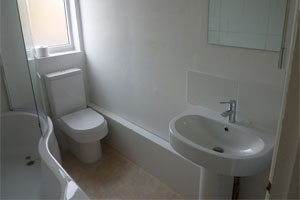 Faced once again with having to replace a bathroom, I think I have now learned from mistakes of the past. About two years ago I was chatting to a plumber about putting in a new bathroom in the house I had just bought. He was very keen for the work but when I mentioned that I planned to buy it from B&Q he didn’t want to know. Previous experience had led him to flatly refuse to install anything ‘plumbing-related’ that had been purchased from that particular store.

So I thought I would go one better and instead buy the bathroom suite from Wickes. To be fair to Wickes the bathroom suite I choose was on the economy side of things, but nonetheless did seem to be good quality. Unfortunately it wasn’t, and I ended up writing to the company complaining about the following three issues:

This was positioned so that once the toilet is plumbed in it is impossible to access. This is a bit like having a silent smoke alarm! In order to have an accessible isolator my plumber had to purchase some flexible hose and other parts and this caused a considerable waste of time. I am baffled as to why the toilet was designed with such a poorly positioned isolator?

The height of the legs is determined by the height of the side panel yet the legs provided weren’t long enough when extended to the maximum height (as well as being slightly unstable when extended to the maximum). This is probably only a matter of adding another 20mm to the ‘screw’ part of the legs although ideally you might want to add a bit more so as to build in a greater stability. As a consequence my plumber had to spend a lot of time making and securing supporting blocks under each leg and this also made levelling much more difficult.

The mixer taps have a shower attachment with a wall bracket for the shower – the implication being that you can use the shower head for a stand up shower. However the length is just 1.5 metres plus that fact that with the hose attachment being under the tap means the hose has to loop down first and there curve round thereby losing further ‘height’ when you want to attach it to the wall. Therefore the maximum height for the fixed shower head just looked like a joke. The plumber had to purchase a 2 metre hose to make the shower an acceptable height for a medium-sized adult!

Needless to say, Wickes didn’t bother writing back to me.

The above is bad enough, but within a year, the toilet seat had broken. This may not sound a big deal but the toilet has to be disconnected to access the the area to replace the seat, requiring a plumber. I have subsequently heard that the toilet seat gradually working loose is a common problem because the screws connect with plastic and the plastic gradually wears away. In future I think I will opt for a more traditional toilet seat like the ones pictured on the Old Fashioned Bathrooms website here.

So a few hundred pounds saved on a cheap bathroom suite has cost this many times over with additional plumbing costs, parts and damage repair. The sad thing with the Wickes suite is that it is actually looks quite nice (see picture) and the issues seem to have arisen due to making very minor cost savings – shorter pipes/hoses, poor connectors, not long enough adjusting screws for the legs etc.

I can’t be bothered to pursue compensation from Wickes, but if they want to “put their name” on this rubbish then that is up to them.

The moral of the story is don’t save money on cheap plumbing parts and fittings as it will cost you more in the long term.