Home » Economy » The economic impact of Brexit on wealth
0

The economic impact of Brexit on wealth

It is quite rare that economists agree on anything – the joke has always been that if you have 10 economists in a room then you will get 11 opinions! So it is quite interesting that most economists think that Brexit will have a negative impact on the health of the economy (even some who are pro-Brexit!). A cross section of economists’ opinion is reflected in the chart below published in the Financial Times in June 2016 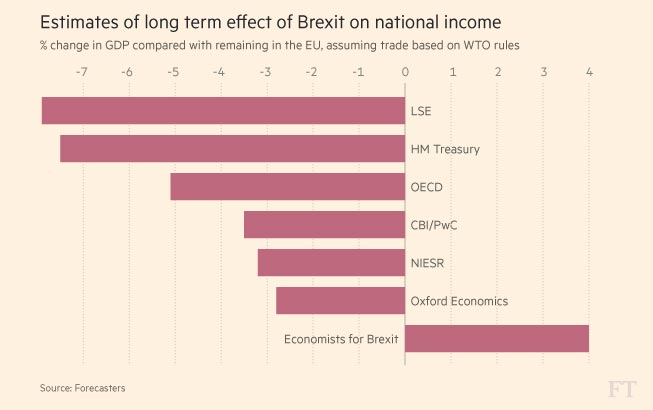 The general consensus is that Brexit will make everyone poorer. Erecting trade barriers with the European Union (EU) will hit prosperity with the opportunity for greater free trade elsewhere in the world not making up the gap. Leaving the EU will give the UK a little bit more additional regulatory control although we will still have to fall into line with the EU bloc on many things.

The Consequence of Uncertainty

The negotiations with the EU could drag on for years and as a result of the uncertainty, companies are unlikely to invest in the UK and many may actually dis-invest. This would be a particular blow if it was to happen in financial services given how much the UK depends on the sector for earnings.
Uncertainty is also reflected in the pound. The financial markets back in early June 2016 clearly had little expectation that the referendum would result in Brexit and as a consequence the pound has fallen more than 15% from its pre June 23rd level. This obviously makes most people poorer because as a nation we import the majority of our day-to-day goods and the weakness of sterling makes these more expensive. This hasn’t been reflected yet in inflation, but there isn’t any way to avoid this in the near future. Brexit also means that we are no longer the world’s fifth biggest economy!

There is of course the counter argument that a lower pound will make it easier for businesses to export and that it is good news for some (although less good news if those same companies are also importing raw materials). So there will be some business winners and we can see this in the rise of certain FTSE companies (Rolls Royce, HSBC and other companies earning in foreign currencies). But will this impact most people? The answer is no! The rising price of food, petrol and utilities will make most people poorer.

Bullish Brexiteers will argue that the economy has done well since the referendum vote – last week saw an unexpectedly good 0.5% rise in GDP since the vote, so nothing to worry about! The problem with this view is that Brexit hasn’t actually happened yet – in fact the positive aspect of a falling pound (exporters) has probably helped as it rather scared the bank of England into another rate cut.

It is very hard to see how the economic impact of Brexit on your wealth can be anything other than negative over the next few years. If you were to move abroad you wealth has already dropped by 15%+ and if you continue to live in the UK you will have the double whammy of zero interest accumulating on any savings whilst inflation will quickly mean your savings and earnings will buy less.

Brexit and trade with the rest of the world

Article 50, the formal legal process to leave the EU, will not be triggered until at least the spring of 2017 and then it will be at least 2 years before the UK can negotiate its own trade deals (which can in themselves take years and Britain won’t exactly be in a position of strength or have experienced negotiators). Even if you make the case that Britain can prosper with trade with the rest of the world and have less regulation, these are really very long term outcomes – they may indeed be very positive long term outcomes, but we are looking at 5 to 10 years before any real benefits will be seen. 5 to 10 years of fewer jobs, less purchasing power and higher inflation will make most people poor.

Ain’t about the Cha-Ching Cha-Ching

It is easy to make the case that UK citizens will be poorer as a result of Brexit – but it shouldn’t just be an issue of money. The Brexit argument was mostly based around issues of immigration and sovereignty as opposed to whether we would be better off – the £350 million ‘back’ each week from the EU was never much of a credible argument. Although people may well be worse off financially some will see this as an acceptable price for ‘independence’.

Let us know what you think about the impact of Brexit on your wealth?

Chasing invoices - how to get prompt payment for freelance work